The Photo Essay of Japan International SportFishing Show 2005 is up.

The 14th W.B.S. Classic final day was extremely windy. It blew 25 m/sec, which is 55.93 mile/h. The anglers union discussed about opening the final day with W.B.S. officials again. Officials drew a map with the coming eye of the typhoon and explained the direction it was moving and the arrival time that came close to the lake at most. They said “you are a bunch of pro anglers who can drive rough water and can think it’s dangerous or not if you wanna go far. Suppose you think it’s unsafe, you wouldn’t need to go far. You can weight-in earlier. It’s up to you whether open it or not.” Union raised a hand to call to open it. However, once they went just outside the marina, there were incredibly large rolling swells. 1 second after they departed, they got all wet. As it was predicted, almost all anglers couldn’t go to their main spots. One managed to go through 6 ft of waves to the other side of the lake and found dead clam spot in creek. He was the winner of the Classic, Hideo Ebihara, weight-inned 3870g for 6 bass. He finished 2nd in 3 tournaments of 4 this year, was actually 2nd place for the AOY race in the past 3 years on a row. Finally, he received a big title.

Despite name change, $6.24 million tournament trail will remain unchanged in most every other respect

BENTON, Ky. - FLW Outdoors, the world's premier fishing-tournament organization, announced Thursday the schedule for its 2006 Stren Series (formerly known as the EverStart Series), which ranks as one of the most popular tournament trails in the nation. The circuit's five divisions, each with four qualifying events, will visit some of the best bass fisheries in the country, including several new lakes.

RIDGEDALE, Mo. - Brent Chapman was getting ready to make the 45-mile run to the marina at Big Cedar Lodge Saturday morning when he decided to make a few casts at a spot he originally had ignored.

That decision produced a couple of keeper bass that helped Chapman earn $100,000 as the winner of the second annual 'Busch Shootout' on Table Rock Lake.

Japan's only woman angler organization, J.L.B.A., saluted its second year for its trail. The final event of its 2005 season was held at Kagato River, Chiba on September 9th, 2005. In this summer, the area of the river did not have rain much. Therefore, the water clarity was clear even though it is usually muddy. On the other hand, the temperature has been up like mid 80's for this summer. As a result, fishing had been very tough. The only hope anglers had was the coming of the cold front, which actually devastated the western side of Japan very next day. The leading angler of AOY points, Ayako Ashida, came back with an empty bag. Then, last year's AOY, Chiho, Higuchi, brought a solid 5 bass limit of 3740g, and she took another crown of AOY 2 years in a row. She used the techniques of flipping Fat Ika (Gary Yamamoto) to thick covers.

The 4th event of W.B.S. Professional Team Tournament 2005 was held in Lake Kasumi, and One of the oldest members of its organization, Shuya Akabane, won 3 of the 4 events they held this year, and it was the 3rd win on the row. 15 years of W.B.S.'s history, he had never won a big title (they open Class every year, and AOY system), yet he has been called one of the best pros around because of his constancy of finishing high on regular tournaments for the past 15 years. "I'm glad that could finally be able to achieve this level, but I still have the Classic to fish, " said Akabane. This tournament's 2nd finisher, Hideo Ebihara, came to finish the AOY race in 2nd place as well. Actually, he finished 2nd in AOY standing 3 years on the row.

Say hello to the new champ! 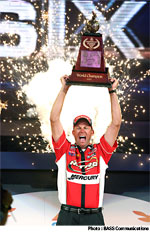 PITTSBURGH - When the 35th edition of the CITGO Bassmaster Classic ended on Sunday, a pair of highly accomplished pros found themselves in very familiar positions.

Michigan's Kevin VanDam brought a five-bass limit to the scales that weighed 4 pounds, 13 ounces. The limit - rare for this Classic, which set an all-time record low final weight - was enough to overtake second-round leader Aaron Martens by a scant 6 ounces. VanDam's three-day total of 12-15 enabled the three-time Bassmaster Angler of the Year to add a second coveted Classic trophy to his mantel in Kalamazoo.

THE DEBATE IS OVER! RICK CLUNN VOTED GREATEST ANGLER OF ALL TIME

THE DEBATE IS OVER! RICK CLUNN VOTED GREATEST ANGLER OF ALL TIME

“John Deere congratulates Rick Clunn, winner of ESPN's Greatest Anger Debate,” said Robert Nelson, promotions manager for the John Deere Worldwide Commercial & Consumer Equipment division. “Rick's dedication and determination to the sport has earned him the distinction of being bass fishing's greatest angler of all time. He is an inspiration to anglers around the world.”


Continue reading "THE DEBATE IS OVER! RICK CLUNN VOTED GREATEST ANGLER OF ALL TIME"

BENTON, Ky. - FLW Outdoors announced its 2006 Wal-Mart FLW Tour schedule and indicated that complete payout details will be released June 21 following registration for the $1.25 million Chevy Open on the Potomac River in Charles County, Md. Next season’s schedule takes the most lucrative bass tournament trail in the world to seven of the nation’s best largemouth and smallmouth fisheries.

The first girls-only bass fishing tournament organization called J.L.B.A. (Japan Ladies Bass Assossiation) opened its season-last tournament on Nagato River of Chiba Prefecture, Japan, in Sept. 19th. There was a deadheat battle for the first AOY of J.L.B.A. Chiho Higuchi caught a 660g of bass and said "it was like T.O. caught his last fish at the last minutes on Classic." She came in second last tournament, and this time she won the tourney and received the AOY title.

New Mexico in front of dawn.

The Louisiana delta of dawn.